Behind the Scenes of Captainship at Hall High 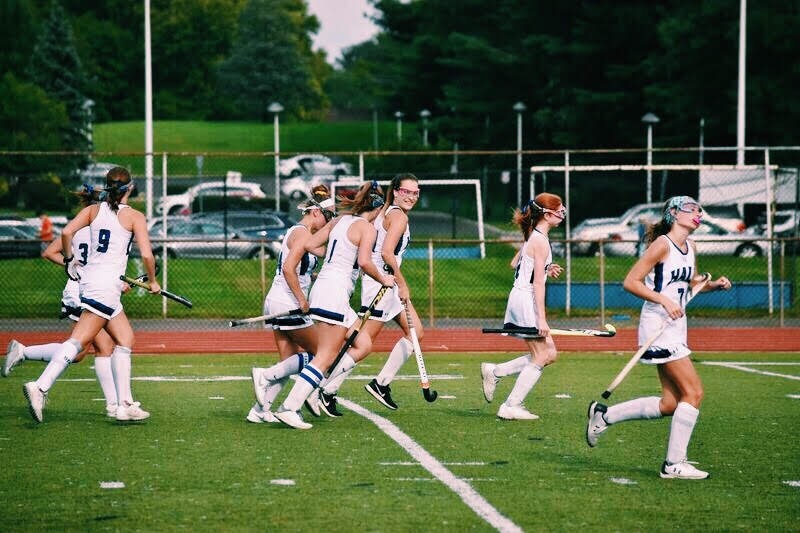 Captains, Elizabeth Pillow and Maggie Grant celebrate after a score with the rest of the team

Whether they are coach-selected or voted on by their peers; whether they were picked a year in advance or right before the season; a captain’s traits and charisma can make or break a team. At Hall High School, captainship is an essential part of our athletic programs, and for the athletes and coaches picking these leaders, there are crucial traits and abilities to look for. At the end of a season, a team is faced with a decision regarding the following year. Regarding the future. So how should captains be chosen?

How Captains are Selected

One of the most difficult decisions to make when it comes to picking a captain is deciding how to select the captain. The two most common strategies to do so are having the team vote and allowing the coaches to select captains. It seems that some athletes at Hall High School prefer that the team votes for captains. Mike DiPietro, a captain of the Hall High hockey team, stated that each individual on the team gets to vote and that he believes that is the most convenient way to do so. Dipietro said, “I believe players should vote because the team should be represented by someone they believe deserves it.” It is a given that each player would have their own picks for who they vote for and why they select them.

Many athletes have a problem when it is up to only the coaches to make the decision of who will be the captains of their team. Some believe that it should be up to the players to vote for captains, such as Elizabeth Pillow. They believe that some coaches are biased towards certain players, may hold grudges against some athletes, and there are many other reasons. Others don’t mind coaches selecting captains and feel like that coaches know their players best such as the Hall girls basketball captain, Siobhan Boyle. She agrees with the statement that coaches should be picking captains. But what are they looking for?

What Makes a Good Captain?

As a captain, one of the most important duties is setting an example for team and younger players. Captains act as role models and can help teach players various techniques and lessons like sharpening skills and conducting themselves on field. Hall High’s players and coaches alike agree that the ability to set an example plays a large role in deciding who qualifies for the position. Coach Mike Mash of the varsity baseball team stresses the importance of the “Intangibles”. He believes to be a good captain, one must be able to lead with not only skill, but more importantly with a dedication to improvement and a sense of responsibility on and off the field.

Leonardo Dionicio, starting running back for the varsity football team agrees has similar thoughts to Coach Marsh on leadership, stating, “A captain should show a strong dedication to the team…They have to be ready to lead us come game time.” While this is what Leo believes a captain should do, he is also aware that this is not always how captains act. Leo believes some captains can bring negative energy which hurt a team’s morale.

Many people believe that strong leadership skills are essential for a captain. Coaches Everett Hackett and Nick Marsh, of cross country and varsity baseball respectively, agree that the first trait they look for in a captain is someone that has the ability to lead. To Hackett, a good leader is dedicated and someone that people look up to you. Their willingness to work hard at a sport motivates the people around them, which subsequently helps the team. Coach Marsh also hinted at the idea of leading by example in his interview.

Despite their shared proclivity to look for a dedicated leader, their opinions differ on if skill should play apart in the decision. Marsh unequivocally said that he does not consider ability when selecting captains. Hackett does consider it, but says “it only plays a minor role” in his decision.

When asking students about the characteristics that they look for in a captain, their answers mirrored those of the coaches. Field Hockey Captain Elizabeth Pillow believes “someone who is a leader and represents the team well” makes a good captain. Football and Lacrosse Captain Jack Mchale concurs, identifying a captain as “a strong leader on and off the field.” Starting Running Back Leo Dionicio agrees with the others, stressing that captains “have to be ready to lead us come game time.”

Much like high school captainship, in the NFL, captainship comes from more than pure skill. It involves leadership, dedication, and setting an example for the team. Former NFL quarterback Chad Pennington believes capainship is not a rite of passage for the very best players. Pennington states “Just because you’re a good player, it doesn’t mean you’re a captain. Some guys just don’t handle that role well. They’re the type of people that have to be so focused on themselves that they can’t take focus off of that and put it on the team. That’s just not how they operate. And I don’t think it’s a good thing or a bad thing — everybody has to find their niche.”

On the contrary, some professional teams don’t feel the need to have a captain position all together. In the MLB for example, there is only one team captain in the entire league. David Wright, New York Mets team captain is honored to be in the position, but does not see it as a necessity. Write states, “I’m not sure if there’s a benefit to having a title and I’ve never been one to like come in here and say you have to listen to me because I’m the captain. I would hope that if I have something to say that somebody would listen to me because of, you know, because of what I’ve hopefully displayed in the clubhouse and be considered kind of a leader in here.” In his opinion, if you are already leading your team, a designation of “captain” is somewhat superfluous. From high school sports to the pros, captains are the backbone of the team. How and why they are selected remains a crucial exercise, one that can potentially decide a season.